The Strangest Ice Cream Ingredient Ever

If you’re like us, you love homemade ice cream so much that you hardly think about the inconveniences involved in making it. The chance to put your very own flavors, candy, brownies, fruit, or any other ingredient in is worth the extra work and time as compared with simply buying a half gallon from the grocery store. You already know how to make ice cream, but what if there was a faster way? What if you could have ready-to-eat frozen goodness just ten minutes after starting the process? 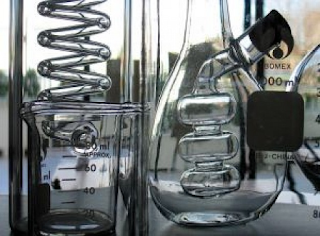 Leave it to scientists to tackle this problem with chemistry. Not content to stick their ice cream in the freezer like everyone else, some researchers figured there must be something in the laboratory that could instantly lower the temperature of the mixture to a frozen solid state. That’s a process that scientists use all the time, so it didn’t take long for them to hit upon the perfect solution: liquid nitrogen.

For nitrogen to become liquid, it must be extremely cold. Once it is at the right temperature, you can carry it around in special coolers. When it touches the air, it quickly evaporates into gas, creating a cool fog effect, so you have to keep it sealed until you’re ready to use it to make—that’s right—liquid nitrogen ice cream!

Liquid nitrogen is fairly easy to find, and it’s not very expensive. Transportation is the main problem, but those who sell it know how to set you up with a cooler that you can return later. If you have between three and five hours before dessert time, of course, you can just make your ice cream the old-fashioned, low-tech way. Check out our recipe to see how to makeice cream without an ice cream maker. It takes longer, but tastes just as good as the liquid nitrogen version.

Have you ever tried liquid nitrogen as a freezing method? If so, let us know by dropping a comment! We’d love to hear what happened.
Posted by Lance at 8:40 AM